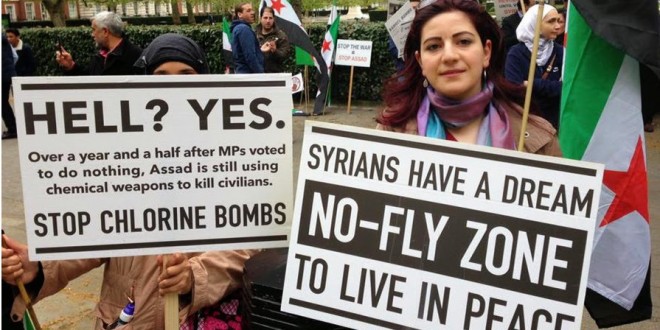 Devious war propaganda is exchanged between globalist "alternative" outlets and "activists" supporting directly or indirectly the western-led aggressors against the Syrian people. One of the most infamous groups are the "moderate" mercenaries and jihadis of the "Free Syrian Army" (its flag appears in the photo)

We post below extracts from an interesting article on the role of the globalist “left”, i.e. several “alternative anarchist” and “leftist” outlets and thinkers of the kind of Chomsky vis-à-vis the wars of the Transnational Elite (TE) in Syria, Libya, Yugoslavia etc.. The premise that “The real propagandists are the ones who cultivate people who actually look like they’re on our side” is the essence of the devious propaganda machine employed by the globalist “left” in order to justify the mass crimes by the TE and its collaborators against the resisting peoples and their regimes worldwide.

War Propaganda in the “Alternative News”: PR Campaign in Support of The Pro-Al Qaeda “White Helmets” in Syria

Are anarchists carrying water for Uncle Sam? SubMedia, a website that publishes “anarchist news and resistance updates” in video form, is now featuring a 5 minute video, “What Is Mutual Aid?” Toward the end of the video the narrator tells us that “glimpses of the anarchist ideal of mutual aid can be seen in . . . the bravery of the White Helmets of Aleppo who risk their lives to pull children from the collapsed ruins of buildings hit by Assad’s barrel bombs.” Really? This is hard to square with reporting from journalists like Vanessa Beeley, who has researched the White Helmets on the ground in Syria, and found that most people there have never heard of them, that they are a creation of western propaganda.

Vanessa Beeley reports that “with over $60 million in their back pocket courtesy of USAID, the UK Foreign Office and various EU nations like the Netherlands, this group is possibly one of the most feted and funded entities within the west’s anti-Syrian NGO complex, a pivotal part of the clandestine shadow state building enterprise inside of Syria. Like many other ‘NGOs’, the White Helmets have been deployed by the west to derail the Syrian state, first by undermining existing civic structures and by disseminating staged PR to facilitate regime change propaganda, through western and Gulf state media outlets.”

Felicity Artbuthnot in another recent article quotes the Ron Paul Institute as saying: ”We have demonstrated that the White Helmets are an integral part of the propaganda vanguard that ensures obscurantism of fact and propagation of Human Rights fiction that elicits the well-intentioned and self righteous response from a very cleverly duped public. A priority for these NGOs is to keep pushing the No Fly Zone scenario which has already been seen to have disastrous implications for innocent civilians in Libya, for example.”

SubMedia has not responded to a query as to whether it was simply mistaken in promoting the White Helmets, nor has it edited the video. As things now stand, it appears subMedia is part of an effort to promote these poseurs as humanitarians, coincidentally in sync with that much larger other video outlet, Netflix, who has just rolled out an exclusive documentary promoting the White Helmets as heroes.  According to Rick Sterling, the group Code Pink actually put out a press release promoting the Netflix movie.

Where there are PR campaigns, there are suddenly awards. According to Sterling,

“on 22 September 2016 it was announced that the Right Livelihood Award, the so called ‘Alternative Nobel Prize’, is being given to the US/UK created White Helmets ‘for their outstanding bravery, compassion and humanitarian engagement in rescuing civilians from the destruction of the Syrian civil war.’ Sterling continues: “

The Right Livelihood organizers may come to regret their selection of the White Helmets because the group is not who they claim to be. In fact, the White Helmets are largely a propaganda tool promoting western intervention against Syria. Unlike a legitimate rescue organization such as the Red Cross or Red Crescent, the ‘White Helmets’ only work in areas controlled by the armed opposition.”

One must beware of radicals sneaking a bit of poison into an otherwise good message. The famous anarchist Noam Chomsky decried the NATO attack on Yugoslavia in 1999, but agreed with the major premise of that attack, which was that Slobodan Milosevic was a brutal dictator who had to be stopped. This went a long way to defusing an antiwar effort leading up to the NATO bombing campaign. Likewise, SubMedia has lots of good information on anarchist principles, but inserts talking points straight out of the US State Department, like the one about “Assad’s barrel bombs.” We are led down a moral road, only to be confused.

In another subMedia video, “Requiem for Syria“, an anonymous narrator called “Stimulator” would have us believe that an anarchist revolution is struggling to be born in Syria, on a par with that in 1930′s Spain, and that Bashar al-Assad is responsible for destroying that revolution. According to Stimulator, “leftists believe that Assad has been targeted for regime change by the United Snakes and its allies and that Syria is being protected by staunchly anti-imperialist homies, Russia and Iran. But putting aside the fact that Russia and Iran are both gangsta imperialist states in their own right who oppress the fuck out of their own citizens, there’s an even more obvious flaw in this logic — the fact that the United States isn’t trying to overthrow Assad at all. The real threat to Assad’s fascist fucking regime has come from Syrians themselves, who, after growing sick and motherfucking tired of having their peaceful protests bombed and machine-gunned, launched a popular fucking uprising, and it’s racist as fuck to ignore that.”

Hidden amid the hip language is another US State Department talking point — that the war in Syria was started by Assad attacking his own people.  SubMedia is attempting to deny on the fact that Israel, the US, Saudi Arabia, and NATO are indeed seeking regime change and have demonized Assad in order to bring that about. Stimulator is in perfect agreement with the main premise of the aggressors: Assad is a brutal dictator, killing legitimate protestors trying to free themselves from his oppression. According to Stimulator, “there’s only one person who can end this civil war in Syria – I’m talking about Syria’s greasy, sunken-eyed, goose-necked dictator himself, Bashar al-Assad.”  We are led to believe that one man is the sole cause of this country’s problems. We heard the same with Milosevic, Saddam, and Gaddafi.

Stimulator goes on to interview Robin Yassin-Kassab, British author of Burning Country: Syrians in Revolution and War, who agrees with Stimulator that the left has been duped into believing “that this is a regime change plot directed by the United States against the glorious resistance regime in Syria, and the facts don’t bear that out at all.” The people of Syria are in revolt, he claims, and Assad is trying to put down the revolt. Yassin-Kassab asserts, without evidence, that “women have been subjected to a mass rape campaign which the regime organized.” This was a propaganda talking point in the attack on Libya, and, for that matter, Yugoslavia.

People living outside Syria lack first-hand knowledge, but a number of sources in Syria have said that Assad actually has the support of the majority of the people there. Lily Martin writes that

“as an eye witness to the entire war in Syria, from March 2011 to present, I can state this was no revolution. I am an American citizen living permanently in Syria, which is my husband’s birthplace. I have been here 24 years. A real revolution would have the support of the people, inside Syria, not Syrians living in Paris and London for the past 40 years. To have a real grassroots uprising, you need the support of the people living inside Syria, who would share your views. If it had been a real uprising/revolution, the whole process could have taken 3-6 months, because the Army would have followed the will of the people, given the fact the Syrian Army is made up of Syrians of all ethnic and religious sects. The Syrian Army is a true representative of the Syrian population. If the population wanted the goals stated by the ‘protesters’, which was to establish Islamic law in Syria, and to abolish the current secular government, the Army would have eventually followed along, expressing the will of the people.”

Lily Martin and Vanessa Beeley are, finally, more credible than the anonymous figures at subMedia. SubMedia is also, like Chomsky, silent about Israeli and US government partnership in the September 11, 2001 attacks, when such perceptive radicals as these should certainly know better. It is not above the practitioners of deception to create an opposition that says a lot of the right things, but does the essential dirty work. Indeed, this is an important part of their trade. The avalanche of lies provided in the mainstream media can be organized by run-of-the-mill propagandists. The real propagandists are the ones who cultivate people who actually look like they’re on our side.

Previous Soros to make a killing with European ‘forced migration’
Next 25 years since collapse of the Soviet Union, 25 years of global instability