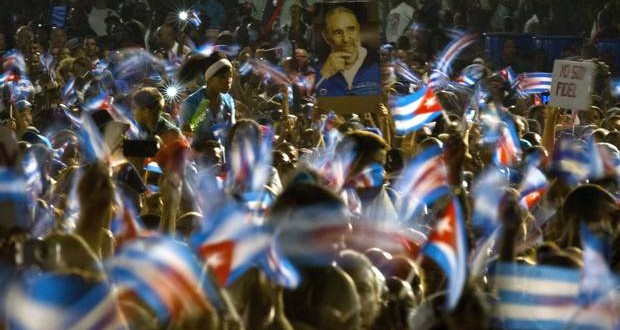 Comment: Fidel Castro, along with Che, took the lead in the last revolution of the 20th century: the Cuban Revolution, that was later supported by the Soviet Union, which, although in 1959 it was not the post-revolutionary Russia in 1917, it nevertheless kept the same (as at the beginning of the Revolution) ideology and continued to create a society where the basic needs of all citizens were covered, even at a common frugal level. In this sense these post-revolutionary regimes have been for many people worldwide bright social beacons. As the following article reminds us all, the social development achievements of the Cuban regime have been outstanding, and this despite the fact that it had to face the most brutal capitalist country in the world, USA, lying some 90 miles from its borders and which did everything possible to violently overthrow the regime for many decades–a fact that is “forgotten” by the globalist parrots who have the nerve to accuse the regime of “authoritarianism”, mainly because it did not tolerate Batista’s agents and the forfeited well-ensconced bourgeois class and Mafia, which fled the country en mass after the revolution. But even more unconscionable is that Greece’s political crook, Tsipras, who has been crashing socially the Greek people for two years as probably the most greasy executor of the criminal EU elite’s dictates, was impiously invited by Raul Castro to Cuba, in order to speak in the Square of the Revolution about Castro’s legacy, together with true leftists such as Morales and Maduro!

Fidel Castro’s Legacy and the Hypocrisy of His Detractors

Fidel Castro’s death, at 90, has sparked a fierce debate in the West over his legacy. I specifically mention the West as elsewhere there is no debate: Castro is lauded as one of history’s great emancipators, a man who led a revolution that succeeded in throwing off the yoke of US imperialism.

But in the West the liberal commentariat has united as one in denouncing Castro as an evil tyrant and torturer who ruled Cuba for over five decades with an iron fist, quashing the human rights of the Cuban people, who in the wake of his death can now look forward to the future safe in the knowledge that freedom and democracy beckons. © REUTERS/ JORGE CABRERA People place candles beside a picture of Fidel, as part of a tribute, following the announcement of the death of Cuban revolutionary leader Fidel Castro, in Tegucigalpa, Honduras November 26, 2016

When we talk about Castro’s critics, it is worth pointing out that we are talking here people who live in societies where poverty has been unofficially criminalized and the poor demonized, despised, and abandoned to a fate of destitution and despair.

We are talking, in the main, the kind of men and women who walk or drive past the ever-growing army of homeless who colonize the streets of towns and cities throughout the West, casualties of a neoliberal economic system that is the real tyrant in our world, without batting an eyelid.

In other words, we are talking people whose condemnation of Fidel Castro is suffused with hypocrisy, the kind that is common among those who have imbibed the received truths of empire.

The most fundamental of those truths is that the West has been divinely ordained with the task of colonizing a Third World — culturally, economically, and geopolitically — that consists of peoples of lower cultures, civilizations and human worth.

The metric by which Castro’s legacy should be judged is the transformation of Cuba as a result of the revolution he led and inspired. And in this regard one salient fact shines forth more than any other — namely that the only place in the world where you will find homeless Cuban children today is Miami.

Let us take a moment to examine in detail the legacy of the “tyrant” Fidel Castro:

When it comes to the accusation that homosexuals were persecuted in Cuba after the revolution, there is no doubt that LGBT rights were non-existent in Cuba in the sixties and for most of the seventies, just as they were non existent throughout much of the world.

Homosexuality, for example, was decriminalized in Cuba in 1979, which compares favorably to Scotland and Northern Ireland in the UK, where it was decriminalized in 1980 and 1982 respectively. Moreover, same-sex sexual activity was only made legal across the entire United States in 2003. It is also worth bearing in mind that homosexuality today is criminalized in Saudi Arabia — a close UK and US ally and a society in which women are treated as chattel and people are routinely beheaded — where it is punishable by death.

The fact is that the existence of homophobia in Cuba predated Fidel Castro and the Cuban Revolution by around five centuries. It was entrenched as part of the cultural values of Cuban society, indeed the cultural values throughout the Americas, courtesy of the Catholic Church. Fidel Castro was a product of those values and to his credit later renounced them, awakening to the justice of LGBT rights. Today his own niece, Mariela Castro, plays an active role in the Cuban LGBT community, leading the country’s annual gay pride parade in Havana last year.

As for torture, meanwhile, the only place on the island of Cuba where this can be found is at the US military detention facility at Guantanamo Bay.

The key point to be borne in mind when it comes to Cuba and its state of development is that countries and societies do not exist on blank sheets of paper. In the Third World their development cannot be divorced from a real life struggle against the huge obstacles placed in their way by histories of colonialism, neo-colonialism, and imperialism, responsible for retarding their progress in service to the exploitation of their human and natural resources.

The legitimacy of the Cuban Revolution lies in its survival in the face of the aforementioned US blockade, designed to starve the country to its knees for daring to refuse to be slaves of global capital. To understand what that would look like all we need do is cast our eyes over to the aforementioned Haiti or Dominican Republic, countries of comparable size located in the same region. Compared to them Cuba stands as a beacon of dignity, social and economic justice, and sustainable development.  Is Castro’s Death the Death of US and Cuba Normalization?

The lack of political rights in Cuba throughout Castro’s lifetime is directly attributable to the US embargo and threat of invasion and subversion by the most destructive superpower the world has ever known, whose record in destroying Third World countries is inarguable. Numerous acts of US-sponsored terrorism have been committed against Cuba and the Cuban people over the years, yet the lack of invective being directed at Washington stands in contrast to the amount unleashed against Castro and his legacy. Funny that.

Fidel Castro was no dictator. On the contrary, he dedicated his life to resisting Washington’s dictatorship of the Third World. As a result of the Cuban Revolution the right to be homeless, illiterate, and to go without healthcare no longer exists in Cuba. In their place have come the most fundamental human rights of all — the right to be educated, to healthcare that is free at the point of need, and the right to live with dignity and pride in being the citizen of a small island that has stood over decades as a beacon of justice in an ocean of injustice.

This, in truth, is the reason ‘they’ despise him. And this, in truth, is why millions of Cubans will come out and pay tribute to his life and legacy on the day of his funeral. For them he will forever be ‘El Comandante’.