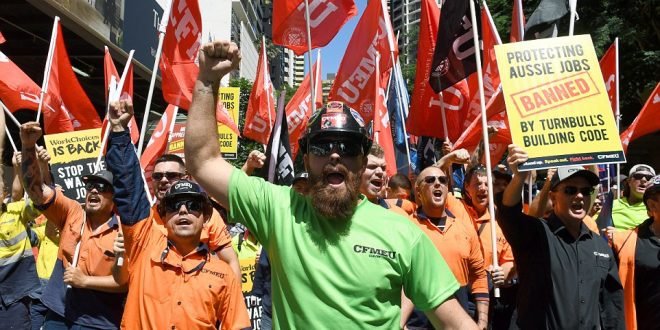 We are happy to reproduce below a brief intervention to the debate on the NWO of neoliberal globalization, with particular reference to Australia, by Arran Gare, the well-known environmental philosopher, accompanied by a brief reply by Takis Fotopoulos. Gare, who is also a reviewer of Takis Fotopoulos latest book (The New World Order in Action: Globalization, the Brexit Revolution and the “Left” (San Diego: Progressive Press, December 2016), having read the book, sent to the author the following meaningful message, which we hope will be expanded in the future.

In his intervention, Gare, whose ecological analysis and proposals —unlike most Green thinkers who have always been in the clouds concentrating in further embellishing their utopias (in the negative sense of the word) —had always rooted in the social and economic reality of neoliberal globalization, gives a brief but utterly meaningful description of how Australia was fully integrated into the NWO. In this sense, his text constitutes an original and meaningful intervention on the debate about the New World Order of neoliberal globalization.

Gare refers first to the pivotal role of the Australian ‘Left’ in integrating the country into the NWO of neoliberal globalization. He then goes on to describe how this integration transformed a rich in resources country into an extractive economy, where speculative investment in housing, mostly by the Chinese elite and unsustainable farming, as well as cheap migrant labour are the main components of the Australian globalization ‘miracle’. The inevitable consequences of the ‘4 freedoms’ (free movement of goods, services, capital and labour) —which have been faithfully implemented by all countries integrated into the NWO, leading to the flourishing of neo-nationalist movements in Europe and the USA— are that few native born Australians are getting decent employment and that the conflict between environment and employment is particularly acute in Australia leading to much resistance to cutting greenhouse emissions or dealing with other environmental destruction —a phenomenon for which the beneficiaries of globalization, including many in the Green “left”, blame on the low level of ecological consciousness of the people involved!

Finally, Gare highlights the ideological and cultural globalization in Australia, as expressed not only by the mass media controlled —as everywhere— by the transnational elites but also by universities “which are now treated as transnational business corporations” and economists at the service of the globalist elites, the mass propaganda for multiculturalism and against any kind of nationalism and national culture, marked by “an effort to destroy the very idea of being a nation”. Predictably, “young Australians are now totally ignorant of their own history and of Australian literature. “His conclusion is that what is needed is “a comprehensive vision for the whole of humanity for the future for communities, of communities in place of cosmopolitanism” which fits also with Kropotkin’s idea of democratic federalism”. This is of course very close to the long-term vision of a confederation of communities based on inclusive democracies, which this journal has always advanced.

The Editorial Committee of the IJID

I have been reading your book, and agreeing with almost all of it. Situated in Australia the weird nature of what is going on is difficult to fully comprehend. Australia was the first place where a supposedly left government, the Australian Labour Party, began implementing neoliberalism, getting rid of tariffs, controls on capital flows, selling off government owned banks and other key institutions. In Victoria, a state government sold of 250 schools, beautiful buildings constructed when Australians were into national building. Australia is claimed to be an economic success, but it has actually been transformed into an extractive economy selling off its minerals, farming in a way that is not sustainable (which does not worry the agribusiness companies who are taking over farming because they will make their big profits in the future when there are real shortages of food). We have a deteriorating net investment position (i.e. our real national debt, now around 65% of GDP), and the supposed improvements in income are due largely to how inflation is mismeasured. Now urban areas are being sold off, largely to wealthy Chinese. Young Australians find it very difficult to get jobs that have any future, and house prices and rents have skyrocketed, so fertility rates are falling dramatically because young people no longer have the means to raise families. So, young people are suffering from the country having been sold out from under their feet. It is because of all this that Australia is so environmentally destructive with so much resistance to cutting greenhouse emissions or dealing with other environmental destruction, and so attacks climate scientist for bringing bad news.

However, what I am grappling with is the success of the global corporatocracy being so successful at organizing consent. There are the broader global matters of the way in which mainstream economics has been promoted to legitimate their triumph. There are very few economists critical of free trade. These include Herman Daly and Erik Reinert. Daly refers to a book attacking free trade published by Culbertson in 1984 which was only published because it was self-published, despite the eminence of its author. What is particularly disturbing about the Australian case is that at federation in 1900 free trade had been rejected. Australians did not want to be just suppliers of raw materials to the British, the consequences of which were evident in the depression of the 1890s. They were influenced by ideas of the national economy argued by Friedrich List. However, this was just part of a range of ideas that our politicians and media moguls, along with complicit academics, have sought to erase from the public memory.

However, what is going on goes far beyond this. There is an effort to destroy the very idea of being a nation. Young Australians are now totally ignorant of their own history and of Australian literature, something that became evident when a student from Germany studying English to teach this is schools in Germany was astonished that in literature subjects there was no knowledge of Australian literature.

However, one of the most difficult areas is immigration. Australia is famous for its brutal treatment of refugees. But refugees are being used as a scapegoat to hide what is really happening. There are huge numbers of immigrants, so when companies want skilled employees, including engineers, computer scientists or whatever, they barely take young inexperienced Australians seriously and import them from India or elsewhere. Multiculturalism is promoted and any form of nationalism is held to be politically incorrect. This despite the left embracing nationalism in the 1960s and 70s and for the most part seeing the Vietnam war as really a war of national liberation from neo-colonialism. So, the collapse in fertility of young Australians does not worry the government because they are happy to replace the Australian population in a way that will destroy any basis for unified opposition to economic globalization. Really, the politicians and the managers in corporations, including universities which are now treated as transnational business corporations, are a comprador class who have been co-opted by the global corporatocracy.

The odd thing is that this strategy has worked with most of those who are suffering the consequences. Recently an article was published on employment in Australia showing how few native-born Australians were getting decent employment. While there was a 474,000 increase in employment between 2008 and 2016, only 74,000 of these went to native born Australians. I read the figures out to my environmental philosophy class and got stunned silence from most of the students and a vigorous defence of current policies by an English migrant who had a good job after coming to Australia on a 457 visa. I think this migration problem is something that the left, and environmentalists have to consider. It is clearly not simple since some migration, and some acceptance of refugees, is a good thing.

In my view, all this can only be addressed by envisaging a comprehensive vision for the whole of humanity for the future. Daly and Cobb argue for communities of communities in place of cosmopolitanism. I think this is a good notion, and fits with Kropotkin’s idea of democratic federalism, with as much decentralization as possible. This is what is required to oppose both economic globalization and chauvinistic nationalism, but it is unbelievably difficult to get even young people to take this seriously.

I will attach the piece from an Australian newspaper showing what is going on with employment, because I think this highlights a problem that has to be addressed that reflects a deeper problem, that people have so little loyalty to any community that they are atomized and rendered utterly powerless. It is difficult to make the point that without this loyalty, environmentalism is hollow.

It is a pity I had not read your book before finishing mine, since I could have used it to bolster my arguments, and I would have emphasised more the notion of self-reliance.

I particularly appreciated your comments because, exactly as you did with your review of Towards an Inclusive Democracy, not only you grasped the very essence of the book, but on this occasion, you managed also to implement the New World Order‘s analysis on the Brexit Revolution and the role of the globalist ‘Left’, in an explanation of Australian development. This is particularly useful because Australia (as well as Canada and USA) are used by the globalists and the Transnational Elites as the perfect examples of multicultural societies, with no sense of national unity, which is the prototype that all peoples in the world should emulate. In fact, as I showed in the book, the Transnational Elites have even managed to pass a UN resolution to this effect a few years ago.

Given the importance of your contribution in highlighting the mostly unknown Australian case of globalisation (which, of course, is not only economic but also cultural and ideological), I wonder whether you would be able to write an article in the journal on this topic. Alternatively, if you are not able at this particular moment to do, so would you give us a permission to publish your letter in the journal, accompanied by a brief introduction of mine?

P.S. I agree of course that the long-term ideal should be a confederation of communities (to my mind, based on inclusive democracies) and, in fact, the last chapter of my book deals exactly with this very issue: i.e. how we can move from the present catastrophic NWO towards a democratic community of sovereign nations. I am talking about ‘nations’ rather than ‘communities’ because I think this is a necessary stage in the strategy of building a confederation of sovereign communities.

*  Arran Gare is Associate Professor in the Faculty of Life and Social Sciences at Swinburne University of Technology in Melbourne. His latest book is The Philosophical Foundations of Ecological Civilization: A manifesto for the future (Routledge Environmental Humanities, 2016)

Previous The systematic effort of the Transnational Elite to crush the ‘Brexit revolution’: From Brexit and Trump to Le Pen – Analysis
Next Brexit, Trump, the AfD and the ‘New World Order in Action’