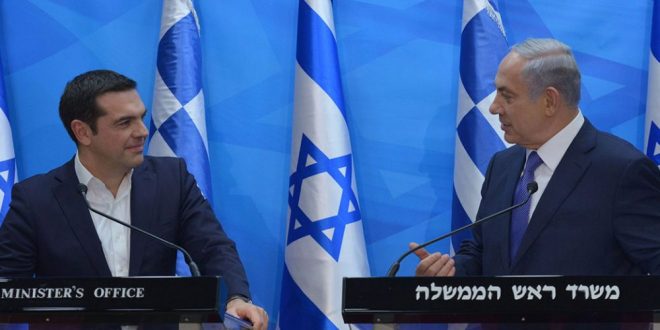 Comment: We reproduce below the main part of the article by a Palestinian journalist on the role of SYRIZA in not only converting Greece into a protectorate of the Transnational Elite but of the Zionists as well—a role which not only betrays the historical connections of the Greek people with the Palestinian struggle but also could well involve Greece into a potential (catastrophic for Greeks) war against the Turkey-Iran-Russia alliance .

Greece is playing a dangerous game in the Middle East

For a brief historical moment, Alexis Tsipras and his political party, Syriza, ignited hope that Greece could resurrect a long-dormant leftist tide in Europe.

A new Greece was being born out of the pangs of pain of economic austerity, imposed by the EU and its overpowering economic institutions — a troika so ruthless, it cared little while the Greek economy collapsed and millions of people experienced the bitterness of poverty, unemployment and despair.

The Coalition of the Radical Left (Syriza) came to power in January 2015 as a direct outcome of popular discontent with the EU. It was a time where ordinary people took a stance to fight for whatever semblance of sovereignty that was not wrestled away from them by politicians, bankers and powerful bureaucratic institutions.

The result, however, was quite disappointing. Tsipras, now prime minister, transformed his political discourse and gradually adopted one that that is more consistent with the very neoliberal policies that pushed his country to its knees in the first place.

Syriza sold out, not only politically and ideologically, but in an actual physical sense as well.

In exchange for bailout loans that Greece received international creditors — estimated at £189 billion between 2010 and 2015 — the country is being dismembered.

Greece’s regional airports are now operated by German companies and the country’s main telecommunications firm has been privatised, with a good chunk of it owned by Deutsche Telekom.

“The only thing missing outside the office of Greece’s privatisation agency is a sign that reads: ‘A Nation for Sale’,” wrote Greek political economist CJ Polychroniou.

Unsurprisingly, economic subservience is often a prelude to political bondage as well. Not only did Syriza betray the aspirations of the Greek people who voted against austerity and bailouts, it also betrayed the country’s long legacy of maintaining amicable relationships with its neighbours.

Since his arrival at the helm of Greek politics, Tsipras has moved his country further into the Israeli camp, forging unwise regional alliances aimed at exploiting newly explored gas fields in the Mediterranean and participating in multiple Israeli-led military drills.

While Israel sees an opportunity to advance its political agenda in Greece’s economic woes, the Greek government is playing along without fully assessing the possible repercussions of engaging with a country that is regionally viewed as a pariah, while internationally becoming condemned for its military occupation and terrible human rights record.

Israel moved to pull Athens into its own camp in 2010, shortly after the Turkish-Israeli spat over the Mavi Marmara attack when Israeli commandos attacked the Turkish boat bound for Gaza, killing nine Turkish nationals and injuring many more.

Although Turkey and Israel have since reached a diplomatic understanding, Tel Aviv has moved forward to create alternative allies among Balkan countries, exploiting historical conflicts between some of these countries and Turkey.

Greece and Cyprus received greater Israeli attention since they, on the one hand, were seen as political counterweight to Turkey and, on the other, because of the great economic potential that they offered.

Just one month after the Mavi Marmara attack, the then Greek prime minister George Papandreou visited Israel followed by an official visit by Israeli prime minister Benjamin Netanyahu to Greece — the first of its kind. That was the start of a love affair that is growing deeper.

The main motivation behind the closeness in relations is the Leviathan and Tamar gas fields, located in the territorial waters of several countries, including Lebanon. If Israel continues with its plans to extract gas from an energy source located off the coast of Lebanon, it will increase the chances of yet another regional war.

When Tsipras came to power on the shoulders of a popular political movement, Palestinians too hoped that he would be different.

It was not exactly wishful thinking, either. Syriza was openly critical of Israel and had “vowed to cut military ties with Israel upon coming to office,” wrote Patrick Strickland, reporting from Athens. Instead the “ties have, nonetheless, been deepened.”

Indeed, soon after taking power, the “radical left”-led Greek government signed a major military agreement with Israel — the “status of forces” accord — followed by yet more military exercises.

All of this was reinforced by a propaganda campaign in Israel hailing the new alliance, coupled with a changing narrative in Greek media regarding Israel and Palestine.

One George N Tzogopoulos has been particularity buoyant about the Israel-Greek friendship. Writing a series of articles in various media, including the right-wing Jerusalem Post, Tzogopoulos suggests that, unlike the older generation of Greeks who have sided with Palestinians in the past, the young generation is likely to be pro-Israel.

“This process (of converting Greeks to loving Israel) will take time, of course, because it is principally related to school education,” he wrote in Algemeiner. “But the change in coverage of Israel by Greek journalists is a good omen.”

That “change of coverage” was also notable in the recent official visit by Israeli President Reuven Rivlin and his meeting with Tsipras and other Greek officials.

In the meetings, Rivlin complained of Palestinian obstinacy and refusal to return to the “peace process,” thus causing a “serious crisis.”

Greece was not always this way, of course. Who could forget Andreas Papandreou, the late Greek leader who gave the Palestine Liberation Organisation (PLO) diplomatic status in 1981 and stood by Palestinians despite US and Israeli threats?

It is that generation that Tzogopoulos and his ilk would like to see gone forever, and be replaced by morally flexible leaders like Tsipras.

However, signing up to an Israel-led economic and military alliance, in an area replete with conflict, is a terribly irresponsible move, even for politically inexperienced and opportunistic politicians. […]

Ramzy Baroud is a journalist, media consultant, author and editor of the Palestine Chronicle.