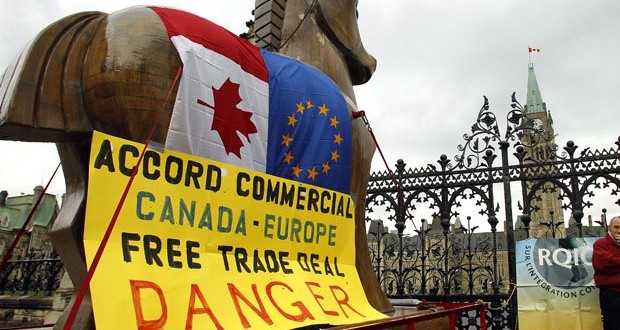 Comment: The following article published in the flagship of the globalist “Left” (The Guardian) attempts to give –in stark comparison to the rest of its pieces and articles– a very different and much more sincere view of what is happening “from below” in the West, with an eye to the crucial elections of November 8 in USA and the major Brexit counter-revolution which is underway today in Britain. The author charily attacks the essence of Globalization, –that is the opening of all markets through the various institutions of the New World Order (EU, WTO etc.) and in particular today the infamous free trade pacts (CETA, TTIP etc.).. It’s the subsequent economic wars of the New World Order against the vast majority of the people that increasingly make them look agonizing for true for true alternatives, and not their implicit racist or far-right tendencies, as the “Left” smears them. The peoples’ hope is that these alternatives might secure a degree of their National and Economic Sovereignty in the face of the razing roller of Globalization. The victims of globalisation have no other option given the full integration of the “Left” to the NWO but to turn to the neo-nationalist movements and any attack against them today is against these victims –radical criticism in terms of the need for a Front for National and Social Liberation (FNSLs), that we suggest, is another thing. When peoples have a real choice through the creation of FNSLs everywhere, then we may attack them, not before!

[our emphasis added in the text]

I hate Trump, but on the issue of free trade he has a point

A car engineer can become a software engineer. If there aren’t any jobs, they can work for Deliveroo

How they fulminate. How they threaten. For decades, presidents and prime ministers, policymakers and pundits have told voters there is only one direction of travel: free trade. Now comes Brexit and Donald Trump – and the horrible suspicion that the public won’t buy it any more. And the elites don’t know what to do, apart from keep insisting the public listen.

In Washington last month, you could barely move for wagging fingers as the heads of the IMF, the World Bank and the World Trade Organisation warned that free trade was in mortal danger. Their outriders in the press have dropped the pretence of liberal politesse for red-cheeked self-righteousness. The hairy-palmed hordes are coming for our internationalism! As if internationalism were little more than business-class flights and the freedom to structure derivatives across several time zones. The Economist slaps an image of antiglobalisation demonstrators on its cover with the headline: “Why they’re wrong”. Coming soon, perhaps: “Why can’t we get the 99% we deserve?”

I heartily agree that Nigel Farage and Trump are grotesques. But the freetraders peddle their own untruths. In their seminar rooms, their TV studios and their Geneva offices, they have perpetrated the ideological sleight of hand that equates internationalism with free trade, and globalisation with untrammelled corporate power. The result has been misery for workers from Bolton to Baltimore to Bangladesh. But it has also left the six-figure technocrats who supervise our economic system pushing a zombie idea. Because that is what free trade has become: an idea leached of life and meaning but stumbling on for want of any replacement.

To see how debased the notion of free trade has become, look at the deal between Canada and the EU that is currently being voted through Europe’s parliaments. It’s called the Comprehensive Economic and Trade Agreement (Ceta), and the fact that you can see it at all is largely down to leaks of the documents, which forced the European commission to publish, after the negotiations were conducted for five years in secret.

Provided it is passed in time, Ceta will apply to Britain too – even after we’ve “taken back control”. It has been billed as “a backdoor for TTIP”, the Transatlantic Trade and Investment Partnership, which collapsed this summer amid public opposition in Europe and the US. Like TTIP, Ceta includes the investor state dispute settlement system – which hands big business the power to sue governments, including for profits they haven’t made yet. A US multinational with an office in Canada (nearly all of them) will be able to sue Britons for bringing in laws that lose them money.

Free trade used to be about tackling protectionism; now it’s about protecting big business – against the public. If populists take a complex situation, offer a simple answer and warn any dissenters of gruesome consequences, then the free-traders are guilty of populism too. With Ceta or TTIP, it goes like this: if this deal goes through, then economies will grow, jobs will appear, and a rising tide will lift all boats, from super-yacht to rubber dinghy. That is pretty much what mainstream politicians of Europe – both left and right – and their officials are saying about the deal with Canada.

In economic history, never mind that the biggest winners – whether the US in the early 1900s or China now – are those who break the free trade rules. Never mind that the forecasts for Ceta show the gains will be relatively meagre. Never mind that the studies cited don’t bother to look at who wins and loses, and by how much. Most of all, ignore their shared assumption that after any deal the affected economies undergo a short, sharp shock before bouncing back. After the financial crisis, the Bank of England and Treasury both kept forecasting a return to normal. Eight years on, that bounceback hasn’t materialised. British workers are still not paid as much after inflation as they were when Lehman Brothers collapsed.

That assumption’s lack of substance is called a “dirty little secret” by two independent economists, Pierre Kohler and Servaas Storm, in a recent paper scrutinising the likely effects of Ceta. As they say, it presumes that laid-off workers “will rapidly find new jobs” – whatever the industry, however far away the employer. A car engineer can up sticks and turn into a software engineer. And if there aren’t any actual jobs, they can deliver takeaways for Deliveroo.

The assumptions are both laughably far-fetched and, in the cost citizens are expected to bear, disgusting. No wonder the EU would rather there was as little public discussion as possible.

Using a model employed by the UN, Kohler and Storm found that the benefits of Ceta become microscopic next to the costs. For at least seven years after the agreement is brought in, unemployment will rise, wages will fall and economies will see their growth rates decline. Governments will lose revenue, and so increase austerity.

The burden will fall hardest on the poorest, the lowest-skilled, older people and those with disabilities. These aren’t people who are left behind: they’ve been chucked off the train by their own governments. This is the settlement free-traders, left and right, are fighting to impose on voters. Is it any wonder the voters keep plumping for alternatives – no matter how reprehensible, how ruinous?

Previous 25 years since collapse of the Soviet Union, 25 years of global instability
Next A Brexit-style revolution in the USA? – Analysis