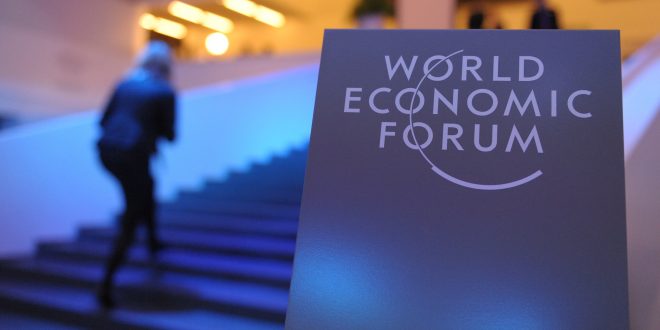 Comment: We reproduce below one of the latest articles by the well known British analyst Neil Clark, who, although a honest liberal rather than a radical “Leftist”,  he managed to show much better than those with Left credentials the hypocrisy of the elites in their stance towards extreme inequality which is plaguing the modern world. The opportunity for this was this year’s  Davos meeting of the World Economic Forum. Clark, following the analysis and rationale developed in Takis Fotopoulos’s latest book (“The New World Order in Action: Globalization, the Revolution of Brexit and the Left“) stresses that in the era of neo-liberal globalization, the huge economic differences that characterize the present social structure, far from being accidental, constitute in fact a basic byproduct, as well as an essential  component of the system’s own function. From this perspective, only the exit from these institutions (EU, WTO, NATO, IMF, etc.) and the creation of a Democratic Community of Sovereign Nations, through the establishment of Fronts for National and Social Liberation (FNSLs) can reverse this process and not, as the liberal “Left” of the Varoufakis kind (Diem 25) suggests, through a different sort of policies within these institutions, which is virtually impossible within the globalist system of open and liberalized markets. This is because within the system created by WTO as well as the Maastricht Treaty in the EU, any policies aiming to radically redistribute  income in favor of the victims of globalization (the vast majority in the world population) will convert any country attempting such policies into a less competitive one and therefore less attractive to multinationals’ investments. Given therefore that today’s capitalist development relies entirely on them, we may easily perceive the deception of systemic as well as “left” politicians of the kind of SYRIZA con artists who talk about reducing inequality without demanding  a complete break with the NWO of neoliberal globalization.

Davos: Where talk on ‘inequality’ is cheap, but a burger platter costs $59

This year, the cool and trendy thing to express concern over at the World Economic Forum is ‘inequality.’ OK, ya? Everyone seemed to agree that something needs to be done to narrow the “staggering” gap between rich and poor – to repeat the phrase used by Canada’s liberal hipster PM Justin Trudeau, the man with those cute yellow and purple ducky socks.

French President Emmanuel Macron, who we’re told was greeted like a “rock star,” declared: “In the global process, capitalism has become a capitalism of superstars, the spreading of value (to those lower down the ladder) is no longer equitable.”

But solutions which would actually reduce inequality were less forthcoming. It reminded me of the annual expressions of ‘concern’ when above-inflation increases in train fares are announced in Britain – the country with the highest fares in Europe. Government-supporting politicians say “this is disappointing” – and guess what – the next year the fares go up again. No one wants to be quoted as saying that they’re in favor of 82 percent of the wealth going to the top 1 percent, but at the same time, they’re unwilling to take the steps which would actually make that an impossibility.

Take this extract from the speech made by British Prime Minister Theresa May:

“We have to do more to help our people in the changing global economy, to rebuild their trust in technology as a driver of progress and ensure no one is left behind as we take the next leap forwards… We have to remember that the risks and challenges we face do not outweigh the opportunities. And in seeking to refresh the rules to meet the challenges of today, we must not miss out on the prize for tomorrow.”

Does anyone know understand what May was actually saying? There was verbiage aplenty in her address, but practical solutions?

It’s the easiest thing in the world to say that “we must ensure that no one is left behind as we take the next leap forwards,” but quite another thing to deliver on it.

In a way, Davos makes one nostalgic for the hard-nosed Thatcherites of yesteryear who at least were honest about what they were hoping to achieve. Now we’ve got Thatcherites masquerading as touchy-feely ‘centrists’ in a jet-set Alpine resort where the cost of a hamburger platter has reached US$59 and a hotel room over $500 a night – and it doesn’t feel right.

Those in power voice their concern over inequality but pursue crony-capitalist, neo-liberal, pro-globalization policies which are expressly designed to enrich the well-connected 1 percent with links to government and leave large numbers of people behind. Don’t forget that Emmanuel Macron, the man who criticized “the capitalism of superstars,” gave the super-rich in France a big tax cut back in October.

Until there’s a clean break from the present economic model, and a return to something like the more ethical and democratic system which dominated in the immediate post-war years, all talk of ‘fighting inequality’ is just virtue-signaling. Just how hegemonic neoliberalism has become can be seen in the fact that even the charities and NGOs who attack inequality, such as Oxfam, whose annual report on global inequality coincides with Davos each year, have CEOs and top executives earning eye-watering amounts. Charity, like almost everything else, has become Big Business, with the pyramid structure the norm. Just over 70 percent of the people on this planet own just 2.7 percent of total wealth; 0.7 percent of the population control 45.9 percent of global household wealth.

You don’t have to be Che Guevara to acknowledge that this is totally obscene and morally unjustifiable.

One book that does show us a way out is ‘New World Order in Action’ by the Greek political philosopher and economist Takis Fotopoulos, which I reviewed here. Fotopoulos explains how austerity policies, which have greatly increased inequalities, are not merely a ‘bad’ choice made by ‘bad’ politicians but in fact a key feature of neoliberal globalization. Austerity is insisted on by the powerful global financial and corporate economic elites who call all the shots. Fotopoulos calls for the formation of ‘national and social liberation fronts’ to make a clean front with neoliberal globalization and its institutions. It’s doubtful he got an invite to Davos.

One man who did though was John McDonnell. Labour’s shadow chancellor, an unapologetic democratic socialist, said he was going to the World Economic Forum for the first time with “a warning for the global elite.”

“Just as Davos faces the risk of an avalanche this week, growth for a few risks a political and social avalanche unless there is fundamental change to our rigged economic system,” he declared.

Of course, this led to an attack on him from defenders of the status quo. Conservative Party vice chairman James Cleverly was quoted in City A.M. as saying: “Not that long ago John McDonnell was praising Venezuela as an economic model. His ideas have consistently failed, condemning people to poverty and hardship.”

But cheap jibes about the Bolivarian Republic – which has been under economic attack for many years now for defying ‘The Washington Consensus’ and having an independent foreign policy – can’t be allowed to deflect from the growing poverty and hardship back home.

This week we learnt that more than 4,000 people have been sleeping rough on England’s streets, a rise of 16 percent in the past year. Overall, the number of homeless families has risen by more than 60 percent since 2010/11. Both child and pensioner poverty are also sharply on the increase.

While in September it was reported that UK households were at ‘breaking point’ as real wages continue to fall.

But hey, let’s keep banging on about Venezuela to scare people from calling for a fairer system, shall we?

Growing inequality is the defining characteristic of the era of neoliberal globalization. Culture wars and identity politics have been promoted by the corporate/financial elites to divert our attention: while we march for or against taking down historical statues, and argue over signage on toilets, money is, all the time, being siphoned upwards, from us to them. Donald Trump – also a speaker at Davos – is merely the latest sideshow.

There will only be change if those who have been swindled by the current iniquitous system (and that’s the vast majority of the world’s population) start demanding their fair share of the cake. It’s worth noting that the great social and economic advances of the 20th century were won because the working classes became organized, and there was an alternative economic model – communism – fear of which persuaded the ruling classes to make concessions. Wartime experiences and deep-held religious beliefs too led many conservatives – like Britain’s Harold Macmillan and France’s Charles de Gaulle – to support policies which put the interests of the majority first.

It was because of strong trade unions, political parties which represented the working class, and the existence of competing economic systems, that inequality in most countries, including the US, had fallen to historically low levels by the mid-1970s. Can we get back to that?  Yes – but only if ‘Davos Man’, wedded to elite-friendly neoliberal globalization and virtue signaling on ‘inequality’ while munching on a $59 burger, is not in the driving seat.

Neil Clark is a journalist, writer, broadcaster and blogger. He has written for many newspapers and magazines in the UK and other countries including The Guardian, Morning Star, Daily and Sunday Express, Mail on Sunday, Daily Mail, Daily Telegraph, New Statesman, The Spectator, The Week, and The American Conservative. He is a regular pundit on RT and has also appeared on BBC TV and radio, Sky News, Press TV and the Voice of Russia. He is the co-founder of the Campaign For Public Ownership @PublicOwnership. His award winning blog can be found at www.neilclark66.blogspot.com. He tweets on politics and world affairs @NeilClark66

Previous SYRIZA’s Greece has become a dangerous protectorate of the Zionist elite, too
Next The aims of the criminal bombing of Syria by the Transnational Elite and globalization – Analysis