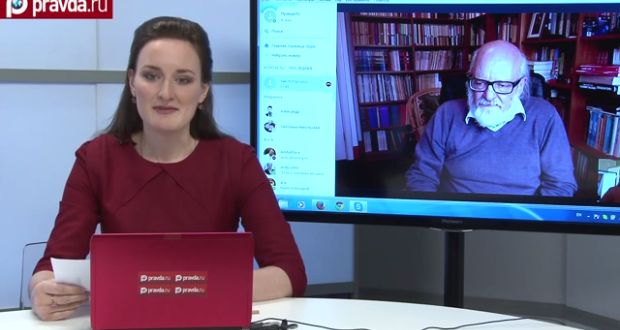 The complete transcript of the interview can be found here : “Is there a way out of the crisis within EU? The case of Greece“

This interview was broadcast live on the English Pravda.ru online television station on 26 February 2015. Takis Fotopoulos speaks to Galina Tichinskaya about the “change” of the political situation in Greece, with the “Left” government of SYRIZA taking over, and debunks that this really is a radical change since all the key commitments of the Troika (EU, ECB, IMF) are being met and continue to be imposed by the EU, rubber-stamped by SYRIZA itself. He also stresses that this is unavoidable in the EU and the Eurozone, analyzing the issue of globalization and how it particularly affects the countries and peoples in unions of countries such as the EU which implement the structural dictates of the New World Order. Finally he talks about the need to create alternative pole as the Eurasian Union was initially designed, and about the role of BRICS in relationship with Russia.

Previous Is there a way out of the crisis within EU? The case of Greece, the role of BRICS & the need for an alternative pole
Next Are austerity policies the problem or is it Neoliberal globalization?