Home / Brexit / What is at stake in the British referendum 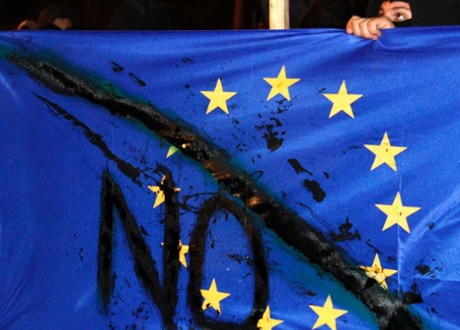 What is at stake in the British referendum

The two sides in the struggle

On the one side there are the entire Transnational and British elites, i.e. the entire network of economic, political and media elites which run the New World Order of Neoliberal Globalization: from the Nobel Laureate Obama, who managed to bomb 7 countries in the first 6 years of his presidency, to the transnational economic and political elites, such as the business federations of Germany, France, Spain, the Netherlands and BusinessEurope — representing organisations in 34 European countries – which joined the UK’s CBI to argue that EU membership is an important factor in maintaining and attracting investment to the UK.

The reason the elites are fighting so hard against Brexit is because they know that a victory for Brexit could set in motion a domino effect that could demolish the EU. This is particularly the case now that an anti-EU tsunami is blowing all over Europe, both in the South and in the North. A Brexit could set in motion forces that could lead to the dismantling of the elites’ entire globalization plan, which involves firstly the effective abolition of economic and national sovereignty within economic unions like the EU and, secondly, the unification of such unions through deals like the Transatlantic Trade and Investment Partnership (TTIP), which puts at risk even the NHS – the major social achievement of the post-war period. The end result of all this may well be that, soon afterwards, poor Britons suffer the same fate as that of poor Americans, who now have the same life expectancy as the Sudanese according to a very recent study![2] In fact, the very reason that Obama rushed to London and then to Berlin was to co-ordinate the fight for TTIP, so that this agreement would not be put at risk by a Brexit.

On the other side, there are the victims of globalization in Britain and throughout the world: i.e. the millions of workers all over Europe who have lost their jobs since globalization began taking effect about 30 years ago, from the miners – after being defeated in the 80s following a long and heroic struggle – to the steelworkers who are about to suffer the miners’ fate, as soon as the referendum is out of the way.

That is, on the other side are all those who are the victims of the opening and liberalization of markets for capital, labour and commodities. As even the Financial Times admitted a few days ago, “we are close to the point where globalization and membership of the Eurozone in particular have damaged not only certain groups in society but entire nations”.[3] In other words, we are talking about all those in Britain (and beyond!) who are forced to work for survival wages and zero contract hours, not to mention the victims of a continuously deteriorating social welfare system (health, education and so on). This system is under the constant threat of further funding cuts while, at the same time, having to cover the needs of more and more people because of the so-called “four freedoms” of the EU, introduced by the Maastricht Treaty and those that followed it (i.e. freedom in the movement of capital, commodities and of course labour).

But it is exactly the imposition of these so-called “freedoms” that could explain why Britain – where supposedly there is almost full employment – is experiencing stagnant real-term wages at the same time. The present ‘job miracle’ in Britain, for instance (which is characterized as “the job creation capital of the western economies”), hides the fact that, as an analyst pointed out, “unemployment is low, largely because British workers have been willing to stomach the biggest real-terms pay cut since the Victorian era”.[4]

What is really at stake in the British referendum

However the elites, including the Blairite Labor Party (its new leader Jeremy Corbyn has already shown his true ‘Left’ colors—which remind one of Tsipras and Varioufakis of whom he is an admirer!–– with his about turn on the EU issue and the suspension of Ken Livingstone, according to the demands of the Transnational and Zionist elites) and the associated trade unions, do not say a word about the real issue of the plebiscite: namely, globalization. Instead, they try desperately to disorient the people to make them believe that the issue is about worker’s rights, with Alan Johnson declaring the other day that “Europe remains the backstop guarantee for workers’ rights”.[5] Of course, working people know full well that their rights have always been won and protected through their own struggle, while the EU is well known for continuously passing legislation, ever since Maastricht, to restrict workers’ rights severely, so that European labor can compete with that of the US, if not China and India. This is what people in Greece, Portugal, Spain and now throughout France as well, are resisting.

Towards a Democratic Community of Sovereign Nations[7]

Finally, from the point of view of the Left, which is supposedly fighting for radical social change, such change is impossible in a globalized world without economic and national sovereignty. What we therefore need in Britain, in Europe and in the world as a whole, is to start building Popular Fronts for National and Social Liberation (PFNSL), in every country which is integrated into the New World Order. Such fronts would fight for the recovery of national and economic sovereignty and the self-reliance of each country, in their struggle for the creation of a new democratic world order based on the values of solidarity and mutual aid, rather than the principle of competitiveness which has led to the present record level of inequality in the distribution of wealth and income throughout the world, as well as to an ecological disaster. Such a process of recovery would necessarily involve the creation of an alternative pole of sovereign self-reliant nations, and Brexit is a precondition for this.

ON TO THE STRUGGLE!

[1] This brief text is based on Takis Fotopoulos’ solidarity statement for the May 2nd rally on the referendum, in Chesterfield. It is also published in Global Research: http://www.globalresearch.ca/brexit-neoliberalism-and-the-eurozone-what-is-at-stake-in-the-british-referendum/5522380

Previous Message to Corbyn and joint statement from 3 unions on a united Labour movement
Next Brexit, Globalization and the Bankruptcy of the Globalist “Left”