Home / Uncategorized / The European Union always was a CIA project, as Brexiteers discover 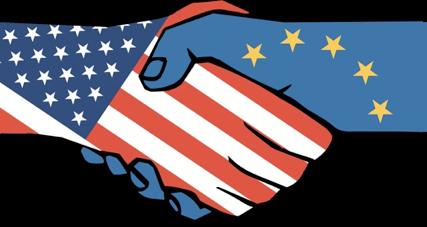 The European Union always was a CIA project, as Brexiteers discover

The following article by Ambrose Evans-Pritchard, a distinguished Telegraph journalist and researcher, reveals the fact that the EU project has been from its very beginning a CIA project, consistently backed by the US. However, the European project was not only a political aim of the Western elites, and particularly of the hegemonic at the time US elite, to create a politico-economic complement to NATO, its main military organ. It could be argued instead that the EU was also very much part of a US major project to restructure Europe (which, back then, was largely comprised of social-democratic states) and the world along the lines of the most predatory kind of capitalism the world has ever known: US capitalism, which traditionally was based on the maximum possible market ‘freedom’. In other words, a capitalism based on the minimization of any social controls on the markets for capital and commodities. Not accidentally, the main post-war economic institutions in the West created by the hegemonic US elite were the International Monetary Fund, the World Bank and the World Trade Organization, all of which aimed at the maximization of the freedom of markets. It was within this context that multinationals flourished and the era of neoliberal globalization began, which has led to the development of a new kind of European Union, as a first step to global governance. So, today it is the Transnational Elite (multinationals and the political, media etc. elites based in the “G7” countries) which rule the vast majority of the world, the prevalence of US has, in fact, been phased out, and the European Union expresses mostly the interests of the Transnational Elite in the European area.

Brexiteers should have been prepared for the shattering intervention of the US.  The European Union always was an American project.

It was Washington that drove European integration in the late 1940s, and funded it covertly under the Truman, Eisenhower, Kennedy, Johnson, and Nixon administrations.

While irritated at times, the US has relied on the EU ever since as the anchor to American regional interests alongside NATO.

There has never been a divide-and-rule strategy.

The eurosceptic camp has been strangely blind to this, somehow supposing that powerful forces across the Atlantic are egging on British secession, and will hail them as liberators.

The anti-Brussels movement in France – and to a lesser extent in Italy and Germany, and among the Nordic Left – works from the opposite premise, that the EU is essentially an instrument of Anglo-Saxon power and ‘capitalisme sauvage’.

Like it or not, this is at least is strategically coherent.

The Schuman Declaration that set the tone of Franco-German reconciliation – and would lead by stages to the European Community – was cooked up by the US Secretary of State Dean Acheson at a meeting in Foggy Bottom. “It all began in Washington,” said Robert Schuman’s chief of staff.

It was the Truman administration that browbeat the French to reach a modus vivendi with Germany in the early post-War years, even threatening to cut off US Marshall aid at a furious meeting with recalcitrant French leaders they resisted in September 1950.

Truman’s motive was obvious. The Yalta settlement with the Soviet Union was breaking down. He wanted a united front to deter the Kremlin from further aggrandizement after Stalin gobbled up Czechoslovakia, doubly so after Communist North Korea crossed the 38th Parallel and invaded the South.

For British eurosceptics, Jean Monnet looms large in the federalist pantheon, the emminence grise of supranational villainy. Few are aware that he spent much of his life in America, and served as war-time eyes and ears of Franklin Roosevelt.

General Charles de Gaulle thought him an American agent,  as indeed he was in a loose sense. Eric Roussel’s biography of Monnet reveals how he worked hand in glove with successive administrations. EU creator Jean Monnet was Roosevelt’s eyes and ears in Europe. Some called him a US agent

It is odd that this magisterial 1000-page study has never been translated into English since it is the best work ever written about the origins of the EU.

Nor are many aware of declassified documents from the State Department archives showing that US intelligence funded the European movement secretly for decades, and worked aggressively behind the scenes to push Britain into the project.

As this newspaper first reported when the treasure became available, one memorandum dated July 26, 1950, reveals a campaign to promote a full-fledged European parliament. It is signed by Gen William J Donovan, head of the American wartime Office of Strategic Services, precursor of the Central Inteligence Agency.

The key CIA front was the American Committee for a United Europe (ACUE), chaired by Donovan. Another document shows that it provided 53.5 per cent of the European movement’s funds in 1958. The board included Walter Bedell Smith and Allen Dulles, CIA directors in the Fifties, and a caste of ex-OSS officials who moved in and out of the CIA. Bill Donovan, legendary head of the war-time OSS, was later in charge of orchestrating the EU project

Papers show that it treated some of the EU’s ‘founding fathers’ as hired hands, and actively prevented them finding alternative funding that would have broken reliance on Washington.

There is nothing particularly wicked about this. The US acted astutely in the context of the Cold War. The political reconstruction of Europe was a roaring success.

There were horrible misjudgments along the way, of course. A memo dated June 11, 1965, instructs the vice-president of the European Community to pursue monetary union by stealth, suppressing debate until the “adoption of such proposals would become virtually inescapable”. This was too clever by half, as we can see today from debt-deflation traps and mass unemployment across southern Europe.

In a sense these papers are ancient history. What they show is that the American ‘deep state’ was in up to its neck. We can argue over whether Boris Johnson crossed a line last week by dredging up President Barack Obama’s “part-Kenyan ancestry”, but the cardinal error was to suppose that Mr Obama’s trade threat had anything to do with the ordeals of his grandfather in a Mau Mau prison camp. It was American foreign policy boilerplate.

As it happens, Mr Obama might understandably feel rancour after the abuses that have come to light lately from the Mau Mau repression.  It was a shameful breakdown of colonial police discipline, to the disgust of veteran officials who served in other parts of Africa.  But the message from his extraordinary book – ‘Dreams From My Father‘ – is that he strives to rise above historic grudges.

Brexiteers take comfort that Republican hopeful Ted Cruz wants a post-Brexit Britain to jump to the “front of the line for a free trade deal”, but he is merely making campaign hay. Mr Cruz will conform to Washington’s Palmerstonian imperatives – whatever they may be at that moment – if he ever enters the White House.

It is true that America had second thoughts about the EU once the ideological fanatics gained ascendancy in the late 1980s, recasting the union as a rival superpower with ambitions to challenge and surpass the US.

John Kornblum,  the State Department’s chief of European affairs in the 1990s, says it was a nightmare trying deal with Brussels. “I ended up totally frustrated. In the  areas of military, security and defence, it is totally dysfunctional.”

Mr Kornblum argues that the EU “left NATO psychologically” when it tried to set up its own military command structure, and did so with its usual posturing and incompetence. “Both Britain and the West would be in much better shape if Britain was not in the EU,” he said.

This is interesting but it is a minority view in US policy circles. The frustration passed when Poland and the first wave of East European states joined the EU in 2004, bringing in a troupe of Atlanticist governments.

We know it is hardly a love-affair. A top US official was caught two years ago on a telephone intercept dismissing Brussels during the Ukraine crisis with the lapidary words, “fuck the EU”.

Yet the all-pervading view is that the Western liberal order is under triple assault, and the EU must be propped, much as Britain and France propped up the tottering Ottoman Empire in the 19th – and wisely so given that its slow collapse led directly to the First World War.

Today’s combined threats comes from Jihadi terror and a string of failed states across the Maghreb and the Levant; from a highly-militarized pariah regime in Moscow that will soon run out of money but has a window of opportunity before Europe rearms; and from an extremely dangerous crisis in the South China Sea that is escalating by the day as Beijing tests the US alliance structure.

The dangers from Russia and China are of course interlinked. It is likely – pessimists say certain – that Vladimir Putin would seize on a serious blow-up on Pacific rim to try his luck in Europe. In the eyes of Washington, Ottawa, Canberra, and those capitals around the world that broadly view Pax Americana as a plus, this is not the time for Britain to lob a stick of dynamite into Europe’s rickety edifice.

The awful truth for the Leave campaign is that the governing establishment of the entire Western world views Brexit as strategic vandalism. Whether fair or not, Brexiteers must answer this reproach. A few such as Lord Owen grasp the scale of the problem. Most seemed blithely unaware until Mr Obama blew into town last week.

US President Barack Obama warned Britain to stay in the EU Credit: AFP/Getty

In my view, the Brexit camp should be laying out plans to increase UK defence spending by half to 3pc of GDP, pledging to propel Britain into the lead as the undisputed military power of Europe. They should aim to bind this country closer to France in an even more intimate security alliance. These sorts of moves would at least spike one of Project Fear’s biggest guns.

The Brexiteers should squelch any suggestion that EU withdrawal means resiling from global responsibility, or tearing up the European Convention (that British-drafted, non-EU, Magna Carta of freedom), or turning our backs on the COP21 climate accords, or any other of the febrile flirtations of the movement.

It is perhaps too much to expect a coherent plan from a disparate group, thrown together artificially by events. Yet many of us who are sympathetic to the Brexit camp, who also want to take back our sovereign self-government and escape the bogus and usurped supremacy of the European Court of Justice, have yet to hear how Brexiteers think this extraction can occur without colossal collateral damage and in a manner consistent with the honour of this country.